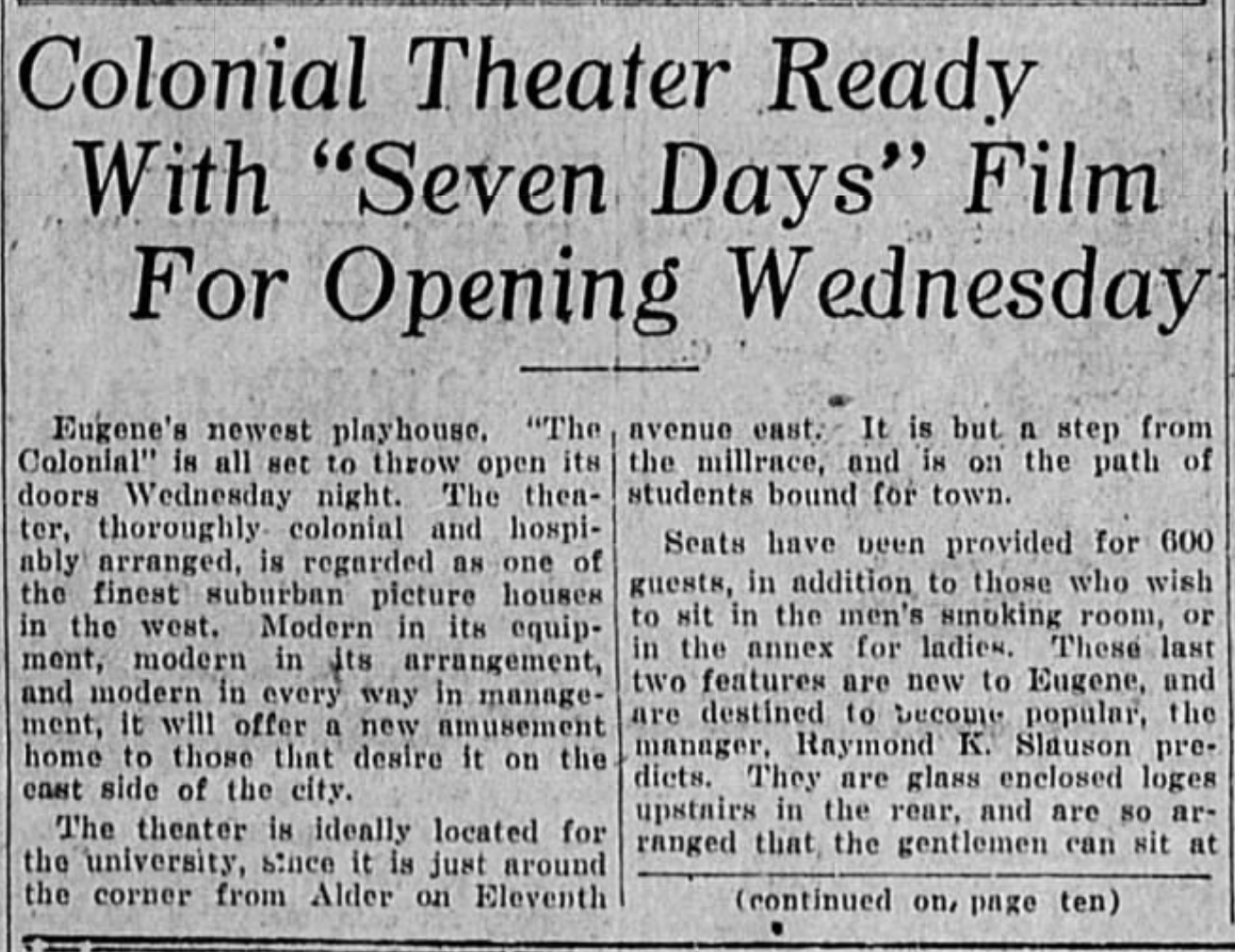 On Tuesday, September 29th in 1925, the day before the Colonial Theater was opened, the Eugene Guard prominently highlighted the upcoming launch of the cinema house in their newspaper articles. In this specific article, the paper discusses the new theater as a “colonial and hospitably arranged” space that claims to be one of the finest suburban picture houses in the west. According to article content, the Colonial is set apart from its competition of theaters because of the modern aspects it has to offer. This includes modernity in terms of equipment, arrangement, management, as well as location seeing as how the theater is located on the eastern side of the city. This location grants easy access for university students and faculty allowing for a higher possibility of filling the 600 theater seats. I also found it interesting how this theater adds new features to theaters in Eugene including a smoking room as well as an annex. These rooms are enclosed in glass which I believe adds to the modern aesthetic the theater intends to accomplish. The announced opening screening will be the ‘Seven Days’ film. The movie is a drama comedy film which I think would be a good genre to start with because there will most likely be something for different audience preferences. More clippings from this newspaper page can be found in the Image Gallery below, and they provide some context for this article’s information. The news page contributes an acknowledgement to groups and organizations who played important parts in the opening of the theater such as Olds Wortman & King Interior Decorating Department, Stein Bros. General Contractors and Builders, Eugene Gravel Roofing Co., and the Bailey Electric company. However, there is also promotion for services located near the theater such as University Tailors, Hiltibrand’s Grocery, and more. Grouping these different ads together and associating them with the Colonial theater is a great idea because this will improve popularity and success for both the theater and the businesses.

Apart from movie exhibitions, the Colonial Theater also held and hosted other types of events. According to the Eugene Guard newspaper, on Friday May 31st of 1935, it was announced that Queen Eugenia the third would be selected at the Colonial Theater. Queen Eugenia was some sort of pageantry competition for the city of Eugene and the Colonial Theater would hold the public crowning for the winning individual chosen from six contestants. The winner would be selected by a vaudeville program arranged by the Junior chamber of commerce, in charge of Eugene’s participation at a Rose Festival in Portland where the winner would go on to represent the city. Before the winner was selected, a parade was held that went through part of the city and would end at the Colonial theater. The parade included the candidates riding in cars, Junior chamber members, as well as the Eugene high school band. In selecting this event to be held at the Colonial theater strongly implies that the theater was a popular place for the city even into its later years of running seeing as how this occurred in May, yet it would not be under operation as the Colonial the following month of this same year. This article also demonstrates that these theater venues were not solely for the purpose of movies, they can also bring communities of people together through different sorts of events in these places for exhibition. Events like these could also encourage guests to return back on another day to view an actual film.