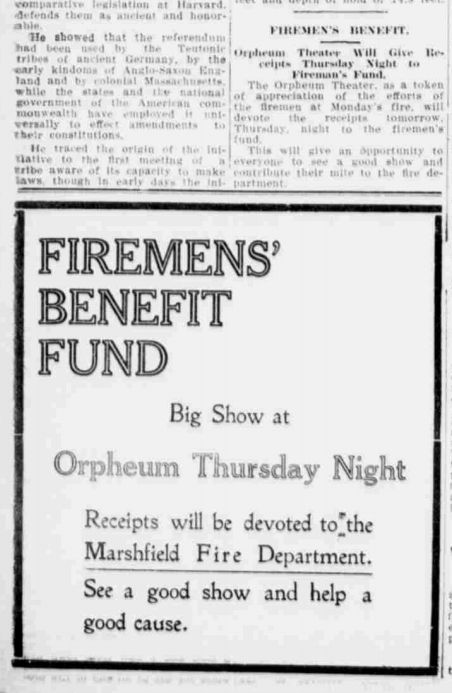 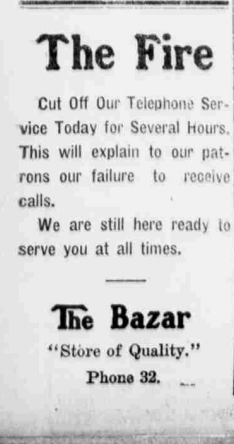 This ad above is a promotional ad for the Orpheum theater, from the Coos Bay Times, February 15, 1913, Coos Bay, Oregon. The ad depicts a night of charity that would occur the next day, Thursday, February 16. The day of charity would be a "big show", presumably of multiple films. The Orpheum theater would give the receipts from the night to the Marshfield Fire Department (note, Coos Bay used to be called Marshfield). This is because there was a series of fires hitting this coastal town in the previous days. The little snippet of information above the ad says that the action will be a "token of appreciation" for the efforts of the fire department during Monday's fire.

After finding the ad with the information about the charity to the fire department, I went searching for ads from the same newspaper, the Coos Bay Times, from the date the fire was described to have happened. Monday, February 13, 1913. The ad to the right is from the evening newspaper from that day, and is describing what I believe to be the fire that the Orpheum theater ad is mentioning. It had to be a big fire. Big enough that the community became united in appreciation for the efforts of the firemen. The ad to the right describes a fire that "cut off our telephone service today for several hours." Which hints to this specific fire being quite large, and impactful. However, there weren't many newspaper articles mentioning this big fire. This was the only one that I could find that seemed reasonably impactful. I did find ads about a family home fire from that same day though: 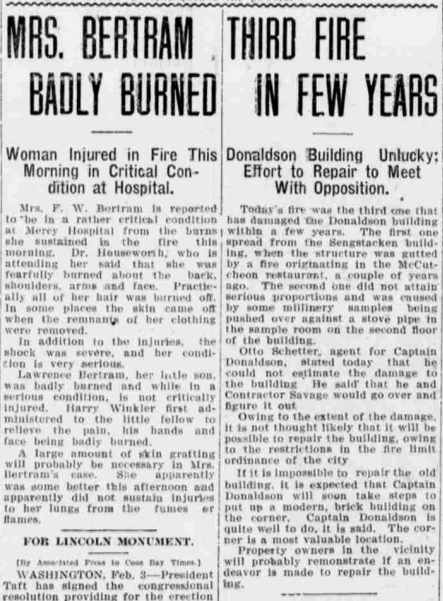 The ad to the right is an ad from the Coos Bay Times, from Monday, February 13, 1913. The day mentioned in the above ad. This fire seems a bit more severe to the people that experienced it, but less impactful to the community over all. The ad describes a fire that burned a woman extremely badly, and was so destructive, that the building it occurred in was unlikely to survive. If you continue reading on (past what I posted) it says the fire was started by a mother and son who were trying to put out their Christmas tree. The mother is the one mentioned in the ad, the son was also badly burned but not in critical condition.

I find this story very interesting because it shines a light on a couple things. Firstly, it shows that Coos Bay was a small, connected community. When something tragic happens, it was felt by everybody. The city acted as a large family. This is evident with the charity that the Orpheum theater was willing and wanting to give to the fire department. And not only did the theater want this, but the money was really coming from regular citizens. Citizens that saw this ad (the above ad) and thought, "The fire department did do a good job, they deserve this. I will go to the Orpheum tonight." This is my opinion, but I believe that this is a sensation that would be hard to find in a big city like New York, LA, or Portland. In cities like that, everybody is trying to accomplish their own goals. There is not enough time for acts of generosity. But in Coos Bay, there is, and they wanted to be generous. The second thing this shines a light on is that this generosity was able to be taken advantage of by the Orpheum theater owners (a smart business move in my opinion). Using newspaper ad space in the most popular newspaper, they advertised their own theater in disguise as charity. Pulling at the heart strings of Coos Bayers who genuinely wanted to give back to the fire department. This move didn't make Orpheum money right then, as they gave all the revenue from that night to the fire department. But Orpheum was investing in future customers, who might remember the good deeds done by them, and pay them back.