Columbia Theater states that they are absolutely fireproof and here's why 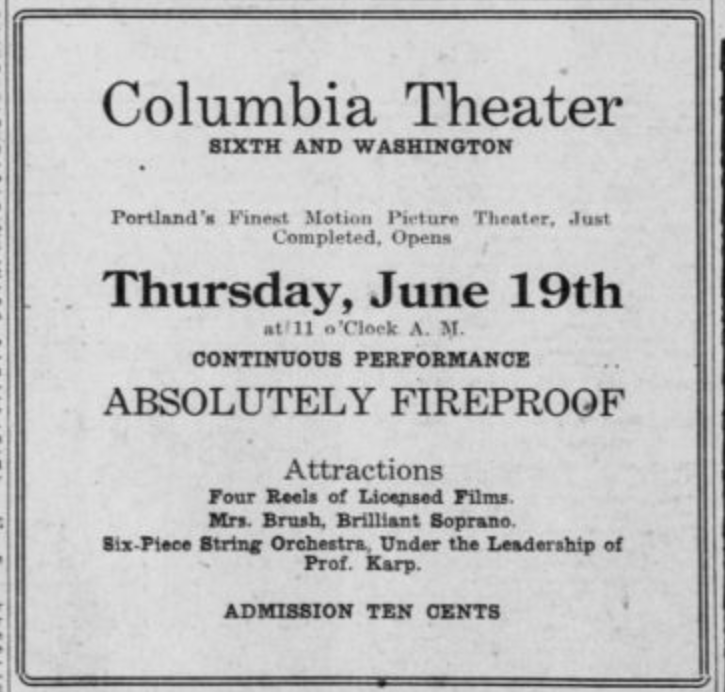 In June of 1913, the Columbia Theaters opened in downtown Portland, Oregon. The Sunday Oregonian had many advertisements and articles leading up to the opening of the theater regarding the arcticutecture, attractions, and location. Some of these ads had a bigger entheses on the theaters layout and architecture itself rather than the attractions the theaters entails. One advertisement in particular, shown in the Sunday Oregonian on July 27th, 1913, states that the theater is “absolutely fireproof” in all capitalizations. This tactic showed the importance for the safety of viewers while in theaters and they wanted the public to know. By 1915, there were 72 theaters in Portland that were exclusively for films. Theater managements quickly learned that if they wanted to become the best and well known theater in the area, they had to become extravagant looking, in person and in advertisements, and make people have a need to go there rather than the others.

In December of 1903, a popular theater in Chicago, Illinois burst into flames killing hundreds of men, women, and children, known as the Iroquois Theater fire.. People were upset when the theater advertised that they were fireproof yet had no plan in place in case one were to happen. All theaters in Chicago shut down for a few days for inspections to take place that made sure all were up to date and everything that wasn't was to be updated. Many other cities heard of the Chicago fire and took the same precautions. These consisted of “new standards for aisles and exits, the use of fireproofing solution on scenery, connected fire alarms, limits on occupancy, the elimination of “standing” tickets, changes to sprinkler requirements, and rules for rooftop flues” (Smithsonian.com). Another alteration that was added to many theaters was panic bars on exit doors and a red light above the exit doors while the theater was in use, this later became known as the light up exit words people see today.

After the Iroquois Theater fire many people around the nation wanted to know they would be safe and with so many different options of theaters they can attend just by walking down a street. What became important to them was every little thing one theater may have to offer, whether it be the movie and location to the architecture and safety precautions. The Columbia Theaters put what they believed mattered to them and others by having “absolutely fireproof” front and center of their Sunday Oregonian advertisement, which also stated their prices, location, and attractions.