The History of Film Exhibition: Challenges and Methodologies

When first embarking on a study of early film exhibition, the entire process seems quite dreary. Even with a narrowly defined focus—a specific Oregon city and during a specific time frame—it can be difficult to even know where to begin. One of the biggest challenges about studying the history of film theaters is the scarcity of primary sources to determine where theaters were even located.

For instance, in his analysis of New York City theaters, Robert Allen relies upon an old city directory to measure the total number of theaters for a given year. However, as Ben Singer points out, even city directories are not a reliable source. He suggests that a company publishing a directory may have wanted to protect its reputation and not publish information for “hole in the wall” theaters. He found a police report that indicated the number of theaters that Allen found from the city directory only represented 40% of the theaters that were actually in New York City at the time. Luckily, this discrepancy in theater numbers is likely to be less pronounced in smaller cities, such as La Grande, Oregon. Nonetheless, the challenges that Singer rightly highlighted in his work persist even when studying a smaller area.

However, this is not necessarily a reason that we should give up on the endeavor of studying early film exhibition entirely. Even though primary sources are quite limited, there is still significant information that we can discern from just a sliver of a source. For instance, in my study of La Grande film theaters, I have found Sanborn Fire Insurance maps to be an invaluable resource. For the reasons outlined above, I don’t think it’s appropriate to use this single source to definitively claim to know how many theaters existed in La Grande at a given time. However, we are able to use this source to examine how a certain area, and even one single theater, changed over time. In the present day, the Grenada Theater is located at the cross streets of Adams Avenue and Fir Street. According to its Google Maps entry, the theater was first built in 1927, but there is little additional information readily available. By looking at the historical record of the fire insurance maps, we can see when this theater first appeared, and how it changed over time. 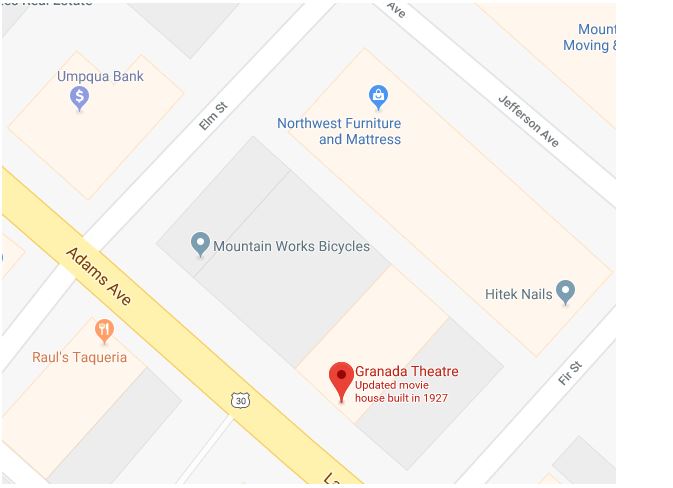 In the maps from 1903 and 1910, there is no theater at Adams and Fir. Instead the space was simply sandwiched between the Masonic Hall and a furniture store. The two addresses–1311 and 1313 Adams Avenue still appear as two completely separated spaces. However, in 1923, the space was first marked as containing “Moving Pictures.” Interestingly, this predates the Google Maps entry by four years. The map shows that a wall was knocked down, giving the theater a significantly expanded space. This suggests that in 1923, when the map was created, significant work had been done on the physical location and that the theater had already been well-established. 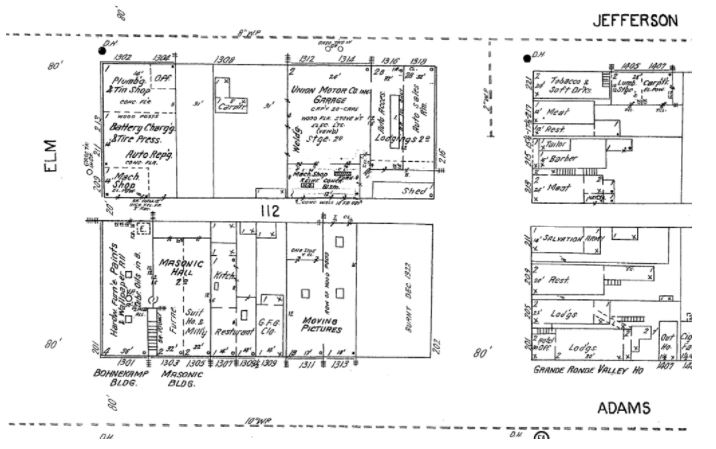 Furthermore, as late as 1949, expansion and improvements on the theater had continued. This latest fire insurance map shows a few key changes to the space. First, the 1311 and 1313 addresses are still labeled, but are written in slightly different positions which may be an indication of the fact that the theater space was no longer seen as two that had been hastily combined, but a proper single location. Additionally, the “row of wooden posts” from 1923 has been removed, and it appears that the building has been redone to only have two large pillars for support. Finally, this last map labels the movie theater as containing a balcony, an addition that may have been added to further improve the moviegoing experience. 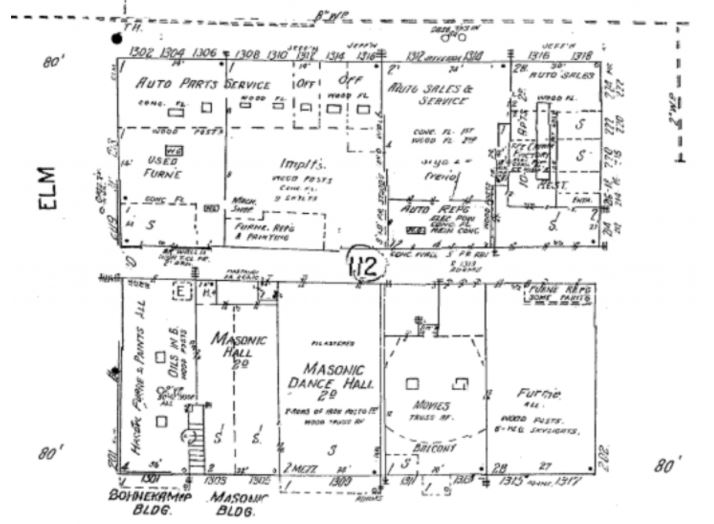 As the work of Allen and Singer show us, discerning information about early film exhibition can be incredibly difficult work. The scarcity and inaccuracy of many primary sources significantly hinders the research process. However, despite these challenges, there are still many potentials when it comes to researching early film exhibition. Even from limited primary sources–such as just a few fire insurance maps–it is possible to tease out many inferences and ideas about how film exhibition evolved and developed.